21 May Ideas for the weekend

Posted at 19:14h in Uncategorized by eve@themarketingmatrix.co.uk 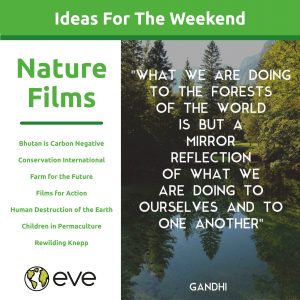 As some of you may know, David Attenborough was due to issue his film ‘A Life on our Planet’ on Sunday 19 April but this has now been postponed until later in the year.

Last week, I watched the film Gandhi and was amazed by what he was able to achieve in his lifetime, despite humble beginnings and, politics aside, I have included one of his quotes about our planet.

Over the years, I have amassed many teaching resources, so thought I’d share some nature and climate change films and clips, as well as more recent ones too (apologies if some of these are provocative!). Including amazing short films from Conservation International found when I had to teach a lesson on soil!

– Conservation International – ‘Nature is Speaking’. Short clips from famous filmstars speaking as if they were nature. (Short clips 1 minute each)

– Farm for the Future – Wildlife film maker Rebecca Hosking investigate how to transform her family’s farm in Devon into a low energy farm for the future and discovers that nature holds the key. (45 mins)

– Films for Action – National Geographic (2016). UN Messenger of Peace, Leonardo DiCaprio, Before the Flood presents a riveting account of the dramatic changes happening around the world due to climate change. (1 hour 30 mins)

– Films for Action – letter from the coronavirus (4 mins)

– Films for Action – The Nature of Cities (2010). Follows the journey of Profession Timothy Beatle as he explores urban projects around the world representing the green movement. (40 mins)

– Children in Permaculture – is an innovative project of international cooperative bringing together educators (from different organisations, educational settings and countries) and deliver high quality training and consultancy services across Europe. (10 mins)

– Rewilding Knepp – In December 2002, the Knepp Family farm set out plans to establish a biodiverse Wilderness Area in the Low Weald of Sussex. It took years for the project to be wholeheartedly supported by the government but it is now a leading light in the conservation movement, producing astonishing wildlife successes in a relatively short space of time and offers solutions for some of our more pressing problems – soil restoration, flood mitigation, water and air purification and pollinating insects. It is shaping the future of nature conservation. (15 mins)