21 May Climate change in action

Posted at 19:19h in Uncategorized by eve@themarketingmatrix.co.uk 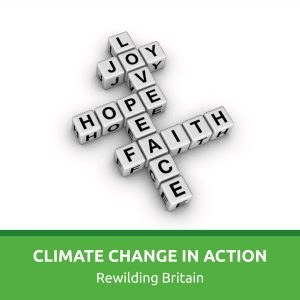 As we celebrate VE Day today the mixed emotions that we feel now of Love, Joy, Hope, Faith and Peace must be pertinent to those who had endured the end of 6 years of war compared to our 6 weeks of lockdown.

As our country still feels in turmoil with the coronavirus, compare this to the turmoil that is still happening with climate change.

We can find hope that our climate will get better if we all play our part.

We can have faith in our own actions that we are stacking things in our favour to improve biodiversity.

We can find joy in the small things on our doorstep now rather than travelling to the other side of the world.

I have started to read the book ‘Wilding’ by Isabella Tree about rewilding a farm in West Sussex.

In the first couple of chapters she explains that during the war the farm responded to the government’s cry for ‘Dig for Victory’ and parts of the farm were ploughed up, including hundreds of hectares of scrub land which totally transformed the West Sussex countryside.

Just before the war Britain imported three quarters of its food and with the help of the Land Girls, ‘Dig for Victory’ enabled Britain to feed itself with the support of subsidies from the government, ripping up hedgerows and turning the land from traditional mixed farming to arable.

Rationing which continued 9 years after the war, changed the mindset of the nation that Britain should be able to feed itself and arable farming was seen as the way forward. Before the war, traditional mixed farming incorporated grass which was good for soil fertility and farmers instinctively knew their soil, had control over what they did with their land, without relying on the government subsidies and avoiding the need for chemical fertilisers. However, the arable crops planted at the beginning of the war had depleted this soil fertility and despite conflicting views that subsidies would not be beneficial in the long run the Agricultural Bill was passed guaranteeing fixed prices for farm produce.

So after the war, our landscape changed dramatically with the trend for mechanized arable farms with the support of subsidies from the government and the need for fertilisers to grow productive crops. Between 1946 and 1963, 3,000 miles of hedgerows were lost per year and according to Farming UK, which encourages farmers to take part in the Great British Hedgerow Survey, Britain has lost half of its hedgerows since the Second World War.

When I worked for the Campaign to Protect Rural England in the 1990’s we campaigned hard to protect the removal of hedgerows and on 1st June 1997 the Hedgerows Regulations came into force, making it illegal to remove most countryside hedgerows in the UK.

Trees too, which support a whole eco- system were seen as a nuisance and damage to crops and ploughing were taken right up to the base of a tree, pesticides leaching into the soil, getting into the root system.

So wide-spread mechanisation, increased use of pesticides, population explosion and fragmented wildlife corridors from hedgerow removable has seen a devastating effect on the UK’s biodiversity, conservation charities too being underfunded and not given the priority they deserve.

With so many nature conservation charities and huge media interest in initiatives such as the Great British Bird Watch and Spring Watch, we have lost significantly more biodiversity over the long term than the world average, ranked it 29th out of 218 countries, according to the updated State of Nature report in 2019, making the UK amongst one of the most nature depleted countries in the world.

But there is hope.

In 2000 Knepp introduced a new concept to conservation, rather than ‘managing’ land with traditional conservation practices, rewilding allows nature to take control. Creating a dynamic system with no predetermined targets, it challenged conventional thinking. With a huge leap of faith and despite initial reservations from other conservation bodies and the government, the farm has attracted international and national acclaim.

Attracting huge public interest the charity Rewilding Britain was set up in 2015, its aims by 2030 are to return 300,000 hectares of core land (the size of a large county) to natural ecological processes.

So like the dramatic change at the end of the Second World War, like Knepp let’s take a leap of faith, put aside our preconceived ideas about what is ‘normal’ and continue the hope that by playing our small part we can make a difference to rewilding.